UFCW Members in Ohio Lobby Against Right to Work 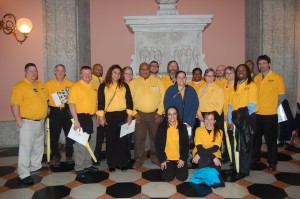 Over 100 UFCW members traveled to Columbus to lobby their state legislators against possible right to work legislation.

More than 100 members from UFCW Locals 17A, 75, 1059, and RWDSU traveled to Columbus last Wednesday to lobby their state legislators against possible right to work legislation.

“I’m here because I’m afraid that they’re going to pass right to work and take so much away from working people,” said Anne Bauer, a seven-year UFCW member from Local 75 who works at the Anderson Township Kroger. “The lower wages, the lack of safety, having no voice on the job – it’s horrible. I have to be here to fight for my coworkers, my friends, and my family.”

Many members spoke about the importance of ensuring the people they elected followed through on campaign promises.

“We have to be here to hold politicians accountable,” said Terry Payne, a Local 1059 member who has been at Kroger for 10 years. “We elect them and by being here we’re able to ensure that they’re supporting us. The legislators I’ve talked with have been very receptive. I was encouraged.”

One of the most important reasons for members to lobby is to share their personal stories with legislators which always make a more lasting impact. Roberta Greaver, a UFCW Local 75 member who has worked at Kroger for 35 years, told the legislators she spoke with about her experience visiting one of the company’s stores in the right to work state of Tennessee.

“These legislators don’t fully understand right to work and I’m happy to be here explaining it to them. I’ve seen what this law has done in Tennessee – there is a tremendous difference between their stores and ours here in Ohio. Their benefits are about half and their pay scale is less. After visiting Tennessee, I was so happy to be in Ohio. The Ohio legislature has to understand how much right to work will hurt workers.”

David Becker, a UFCW Local 1059 member who has worked at Meijer in Toledo for five years, said the lobby day motivated him to become more involved in his union and politics.

“When it comes to right to work, everyone should be here. We’re squeezed enough trying to buy food and pay our rent – legislators have to understand that right to work will only make that more difficult. I plan on coming to lobby days as often as I can.”