OUR Walmart Wins Huge Victories on Scheduling and for Pregnant Workers 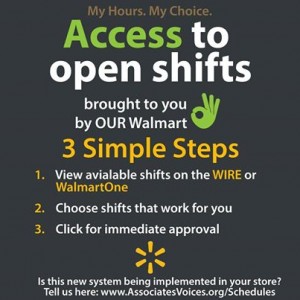 Recent OUR Walmart victories include new scheduling policies and protections for pregnant workers.

After years of relentless campaigning and advocacy by members of OUR Walmart along with their allies in the UFCW and labor, faith, and progressive communities, Walmart has announced two major policy shifts. One will allow workers to get more hours when they want them, another will ensure that pregnant women are given some basic accommodations that will help them keep their jobs and provide for their families.

Since the group’s inception, OUR Walmart members have spoken out about the need for access to full-time work, and the struggles of being scheduled for fewer hours than they need to get by. At the same time, as a result of chronic understaffing in stores, there have been reports of empty shelves and lower customer satisfaction. Most recently, OUR Walmart sent delegations to dozens of store managers across the country, and members launched a national petition calling for access to full time work. In Laurel, Md., OUR Walmart members stood together and got their manager to post open shifts in order to give more access to hours to part-time employees.

Walmart workers from across the country kept the pressure on for more shift access in stores. They went on strike to protest Walmart’s attempts to silence them when they spoke up against about inconsistent scheduling, insufficient hours, and low wages. Shortly after their Black Friday actions, Walmart announced it would increase transparency in scheduling, but few stores saw these promised changes take effect.

With the support and the signatures of thousands of Walmart workers and community members, Walmart workers held delegations at stores around the country last month. Walmart responded by posting important changes to its scheduling policy that will allow workers to get more access to the hours they need to support their families.

Walmart also recently altered its policy to accommodate pregnant employees. Under pressure from mothers working in their stores and women’s groups with the “Respect the Bump” campaign, the retail giant reworked its policy so that women with pregnancy-related complications could be considered temporarily disabled and be eligible for reasonable accommodation. While this policy does not go far enough to provide reasonable accommodations regarding physical demands for all pregnant women, it is a step forward in protecting the jobs and health of the most vulnerable pregnant women and their babies.

For decades, Walmart has been lowering the standards for retail workers. These two victories are an important step toward improving jobs at Walmart and ending the erosion of retail jobs across the industry. The victory shows that by standing together, workers can make change even at the largest private employer in the world.