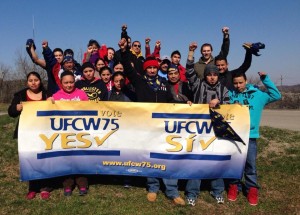 Workers at Cincinnati Processing ratified their first contract on March 26.

UFCW Local 75 workers at Cincinnati Processing, a plant that supplies pork products to Kroger stores in four states, ratified their first contract on March 26. Organizing at the plant was a multi-decade struggle for plant workers and the first contract marks the successful conclusion of that campaign.

The cutting of pork products used to the be the job of union butchers at Kroger stores across the Midwest. However, with the increasing role of case-ready meat, those jobs transitioned to further processing facilities like Cincinnati Processing. Workers began to organize at the plant in the 1990s. However, a prolonged legal battle kept these workers from forming their union.

Their struggle to have a voice at work at Cincinnati Processing continued for a decade, but ended with a successful vote in 2013. Since then, workers have been fighting hard to negotiate a good first contract. It took a unanimous strike vote, but the workers finally got a contract they could be proud of in their new union shop.

“With this contract we were able to improve our working conditions and win a voice on the job,” said Ignacio Huerta, a cutter at the plant for six years.  “I’m so proud of my coworkers for standing together and making this happen.”