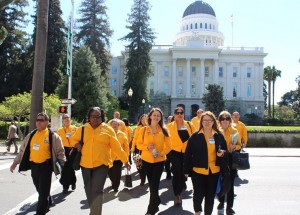 UFCW Local 1428 members traveled to Sacramento, Calif., to speak with legislators at the State Capitol about bills working families would like to see passed in their state.

On March 18th, UFCW Local 1428 members traveled to Sacramento, Calif., to speak with legislators at the State Capitol about bills working families would like to see passed in California.

AB 1792 would require the Department of Finance to prepare an annual report highlighting which large companies in California have workers on public assistance programs like food stamps and Medi-Cal.

These programs were designed to help workers through tough times, not as a permanent subsidy to low-wage employers. This report would be used to inspire legislative action against large corporations like Walmart that are failing to pay their workers a living wage and forcing them to turn to the government for help.

AB 1522 would guarantee paid sick leave for every worker in California. This bill would ensure workers who become sick are given the time they deserve to get better.

“I was amazed to find out all the work my local does in politics,” said Peggy Macias who works at Food 4 Less. “So much of the work they do to pass laws that benefit workers in California we just take for granted. This experience made me realize why it’s so important that everyone is signed up to contribute to ABC.”

“This was my first trip to the capitol. I have always wanted to be more involved with my union and this trip opened my eyes to what all my union does,” said Myishia Carter who works at Stater Bros. “The trip was educational, exciting, and made me feel like I was making a difference. The entire day inspired me to be more involved. I am a new union steward and can’t wait to go back to my store and tell everyone about my experience and how much I learned.”

UFCW Local 1428 members said they would continue to push their elected officials to support workers in California.