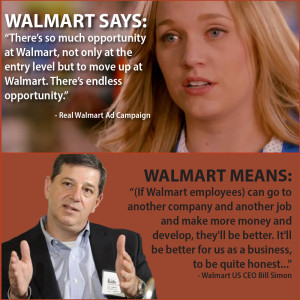 A recent Associated Press article by Josh Boak finds that Walmart does not provide its employees with enough opportunities for professional advancement or a pathway to a middle class life. As a result of the Great Recession, many older and more educated workers are turning to the retail giant as a way to support their families. Despite Walmart’s self-promotion as a source for professional opportunity, Bill Simon, CEO of Walmart U.S., suggests that workers look elsewhere if they want to make more money and have access to better benefits.

“Some people took those jobs because they were the only ones available and haven’t been able to figure out how to move out of that,” Bill Simon, CEO of Walmart U.S., acknowledged in an interview with The Associated Press.

If Walmart employees “can go to another company and another job and make more money and develop, they’ll be better,” Simon explained. “It’ll be better for the economy. It’ll be better for us as a business, to be quite honest, because they’ll continue to advance in their economic life.”

Simon’s suggestion that many Walmart employees might be better off leaving for other jobs surprised Walmart cashier Joanna Lopez. A 26-year-old single mother, she owns no car and lives with her church pastor near Fremont, Calif. She collects food stamps and receives insurance through California’s version of Medicaid.

Lopez started at Walmart as a temp in August 2011. Her pay has risen from $8 an hour to $9.20, after she moved from part-time to full-time. The suggestion by a Walmart executive that some employees might be staying too long offended her.

“To me, that’s an utter humiliation,” Lopez said. “How can you sit there and have management say that we should find other jobs because this place is ‘no bueno?’”