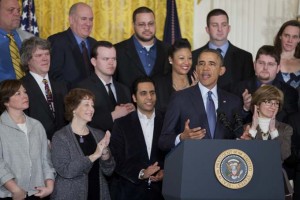 UFCW Local 400 member Rob Trotter (standing in back with blue shirt and glasses) stands by as President Obama orders an expansion so more salaried workers qualify for overtime pay.

President Obama ordered the Department of Labor to expand federal rules so that more salaried workers would be able to qualify for overtime pay. Currently, any salaried employee making more than $455 per week is not required to be given overtime pay when they work more than 40 hours in a week.

The current $455 per week salary threshold has failed to keep pace with inflation. It was $250 in 1975, equivalent to roughly $1,000 today. This expansion will give millions more workers across the nation the chance to earn extra pay when they do extra work.

UFCW Local 400 member Rob Trotter, a meat cutter at Giant in Annandale, Virginia, stood next to President Obama as he signed the memorandum.

“I have worked in retail for over 20years for an hourly wage,” he said. “I have depended upon overtime to pay school tuition for my children, or to get out from under a financial hardship. The opportunity to earn overtime has always been helpful and comforting to me.”

It is not yet clear by how much the salary threshold will increase. The President’s order instructs the Department of Labor to come up with an expansion plan following a period of input and study. With the stagnation of wages and the increase in corporate profits, actions like this give workers a better chance to provide for their families.

“There have been years when 20 percent of my income was comprised of overtime,” Trotter said. “Going above and beyond expectations at work takes a toll physically because you’re working harder and emotionally because you’re away from your family for a longer period of time. Every employer should fairly recognize and reward this sacrifice.”